This morning I appeared on CBS’ Monsters & Money in the Morning as an example of a small business thriving in these economic times. The producer saw the article in yesterday’s Chicago Tribune and wanted to find out more.

Me, wearing the Dodecahedron Choker. 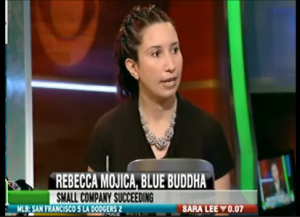 Mike North contemplating my sculpture titled, “It’ll always be Sears to Me!” 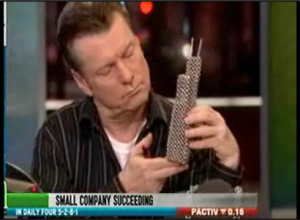 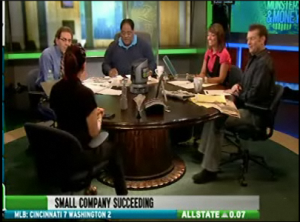 Two necklaces. Note the clock in the background–yep, that would be 5:17 a.m. I woke up at the early hour of 3:00 this morning in order to appear on the show. Whew! 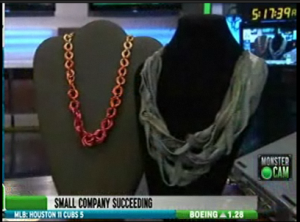 On an interesting sidenote, the makeup artist fell in love with my necklace. She told me that she knows someone who recently took a chainmaille class in Chicago and has been making pieces like mad! I would bet 10,000 H18 anodized aluminum rings that the class was with Kat or Vanessa. Small world!

10 Comments on "“Monsters & Money in the Morning”"

Congrats on your success!

Your jewelery has inspired me to make some of my own designs/variations. So far they are a hit with friends and family. You do amazing work and I’m happy to do business with you.

You looked gorgeous up there. I would be proud to work for you, but I live on the west coast and the commute would kill me.

Congratulations! Nice ad for Blue Buddha and for the chainmaille world!

Thanks, everyone. My cup of Lady Grey perked me up in the morning….and the makeup artist is pretty fierce. So I’m glad you all thought I looked good in the wee hours of the morning.

I had no idea that’s how you found us, Amy. Very cool. And yes, how can one NOT like our mascot? 😀

Wow, congrats! I usually catch the tail end of that show (I honestly had no idea it even started that early) but missed it – will have to check out the clip! And I agree you look great – would never have guessed you got up at 3 am!

And so you know you guys are also the reason I started makinig chainmaille jewelry because I was looking for something (I think some sort of clasp – I can’t even remember) and your site came up in the google search – the site was awesome and totally got me interested. And of course having a mascot that is a cat is a big draw too!