On a recent trip to Los Angeles, Rebeca stopped in to a Barnes & Noble bookstore and did a little “experiment”. 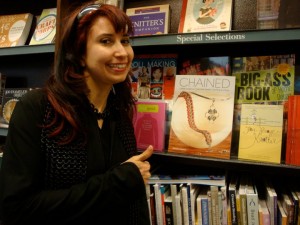 She moved her book CHAINED from a shelf where just the spine was facing outward to a shelf with the cover facing outward in an act we’re calling “guerrilla marketing”. Mostly, this was all in good fun and made for a fun facebook pic – however, in the two weeks following her act of rebellion, book sales by region were highest in L.A.!

Coincidence?  We think not. 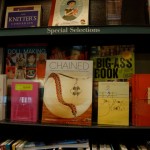 We are so proud to have customers that are also educators and ambassadors for the art of making chainmaille jewelry and while we don’t condone (*wink wink!*) the kind of rebelliousness exhibited in Rebeca’s act of guerrilla marketing**, we do believe in doing whatever it takes to grow the craft and introduce it to as many people as we can.  Any hey, if you feel like doing a little “experiment” of your own – who are we to judge?

**Note: No other books were harmed during this act; the space Rebeca moved CHAINED into was unoccupied, just ready to be filled with crafty wonderfulness!

5 Comments on "Chainmailling the world with the help of….Guerrilla Marketing!"

That is awesome advice, Kate! Thanks! I will be sure to try to track down the folks doing the shelving whenever I go to a bookstore. Great idea!

I’ve been in the book selling business, and this is the advice I give all writers: Say “Hi” to the store manager when you go into a chain bookstore, but make a special effort to track down and schmooze with the person in charge of the section where your book is located. The manager does not shelve books; the peon does. From personal experience and from talking with other booksellers, I can tell you that if the person in charge of that section likes you, you will always get a face out. If you are snotty to or just plain ignore that person, you will never get a face out.

I’m all for “guerilla marketing”!!! Plan to visit my 2 local B&N stores tomorrow!
B3 is way cool.

You absolutely rock, you know that right, Leayn?

I lured a few more people in myself this month! Next time I’m in my local bookstores, I’ll check to see if your book is on the front-facing shelf.—Leayn