The words “audit” and “IRS” can strike terror in the hearts of many Americans—individuals and business owners alike.  It’s hard not to have visions of a monstrous institution filled with agents dressed like characters in a Dick Tracy comic, waiting in rooms with interrogation lamps and you with your box of crumpled receipts.

The reality however, is that if you’re being audited, you’re not up against a big headless institution.  Ultimately, you’re going to be dealing with one person (this became very apparent to us when our one person had to cancel because they had broken their wrist – I.R.S. agents really are human!)  It becomes your job to make that person’s life as easy as possible (and avoiding annoying them at any cost.)  The best way to do this?  Do what is asked of you in the preparation stage (see my previous post Preparing For an I.R.S. Audit.)  Yes, it’s a lot of work—although, by keeping really good records, it doesn’t have to be that bad—but it’s worth it.  We know from experience!  Continue reading to learn more about the actual audit and what we learned from the entire ordeal. 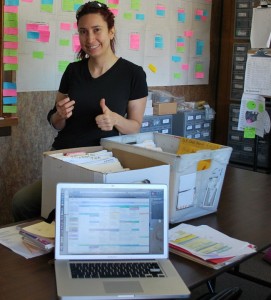 The morning of the audit came.  I was ready! “Bring it, IRS!” I said, as I gathered my paper files, USB flash drive, receipt books, and my handy-dandy spreadsheet that now had a new column indicating where each item was for quick retrieval during the audit (i.e., – whether the item was on the USB stick or if we had a hard copy, and what the file or folder name was). You can see my colorful spreadsheet in the photo here, just to the right of my laptop.

Despite my enthusiasm, the audit was not to be had that first day, the next, or even the next….but that’s a story for another post (see Audit Bloopers).

When it did finally happen, the audit was fairly straightforward – really.  My CPA had told me the agent would probably be surprised that I’d pulled together everything on the list and sure enough, she did seem surprised that I had everything (Operation Make-Their-Lives-Easy-And-Don’t-Annoy-Them = complete!)  “Wow,” she said, “You’re so organized!”  (This sentiment was repeated a few times throughout the audit, particularly when she took a tour of our facilities and saw our shelves of inventory *grin*.)

The agent wanted to review the classified items, so I pulled up my ledger and told her exactly how the money in those categories was spent.  She took notes on the breakdowns of each category. After thoroughly reviewing the classified items, which took all of about 20 minutes, the agent was satisfied with the responses and said everything was in order.  I answered a few other questions (How do you count your inventory? How often do you count your inventory? How much of your orders are paid for in advance? etc).  None of the questions were particularly intrusive, and none of them surprised me.   We took a tour of the facilities so she could see some of the day-to-day operations. Finally, the agent requested a copy of my QB file on a USB stick as well as hard copies of my business and personal tax returns for the years requested.

And that was it. I had been warned that the audit could take up to four hours, and I’d set aside my entire day just in case, but we were finished in about an hour and a half!  Yipee!

(I secretly hoped that the IRS agent would write some note in my file that read something like, “This business is so organized and on top of things, that we should never audit them again because it is just going to be a waste of taxpayer resources.”  Well, I can hope, right?)

The agent told me she’d be recommending “no change” to my tax return, but there were still a few levels of people who needed to review the QB file, so it could be several weeks or even a couple of months before we’d know for sure what the final verdict was.  She said she would be in touch if they had any questions once they’d reviewed the files.  I decided to keep separate all the papers and files I’d pulled just in case they were needed again.

A few days later, I received a confirmation letter with the “no change” recommendation, and then the real waiting game began.  Finally, about 6 weeks later, on December 12, I received the official letter from the Powers that Be:

Our recent examination of your returns for the above years shows no change is ncessary in the information reported. We have accepted the returns as filed.  This is the final notice you will receive regarding the examination.

Yay!  Seven months after receiving the initial notification letter, we were done.

All in all, we’d probably spent about $500 in accounting/bookkeeping fees and about 15 hours of staff time to prep for the audit.  It was an irrecoverable expense, but definitely a manageable one for a business our size.  And I think it’s made our business be in even better shape for the future.  My main takeaways:

When my accountant sent back my file, out of the thousands of entries, there were only a couple that she’d flagged for me to double check (perhaps the memo field had a question mark in it, or one company that we typically bought inventory from had a charge in a different category, because we bought office supplies that one time, etc.).  If we didn’t keep good books, I probably would’ve spent dozens of hours going through our file, instead of just about 6 or 8.  My goal is to have even more solid numbers going forward. For the past few years, I’ve been sending my Quickbooks file to my CPA three times a year (not including tax time) for review. I am now asking her to look at everything with the same eagle-eye we did during the audit. This way, if something, no matter how small, doesn’t make sense, we can catch it right away, instead of trying to remember all the details two years later.

Stay on top of the numbers regularly.

Even though our books were good, they weren’t perfect.  There were a handful of items that I realized had been miscategorized. I used to enter all the data in myself, but I’ve since delegated this responsibility, and I realized that some information slipped through the cracks.  For instance, even though I know that two separate charges from the same vendor might be in two different categories because we purchase different types of items from that vendor, my bookkeeper who only comes in twice a week will not know that by just looking at the bank and credit card statements.  So I vowed to look more closely at the line items after data is entered into our Quickbooks file.

Be prepared on audit day.

I made sure to have every single piece of documentation the IRS requested either in hard copy or digital format, and knew exactly where to find it.  This meant that when the agent asked me a question about a specific charge, I could pull up a spreadsheet and locate the relevant information within seconds. Because I knew exactly what was going to be asked, nothing was a surprise.  It was kind of like taking a final exam when you’ve gotten the questions a few days before.  Having said that, however, I do acknowledge that finding a few of the items in the first place, to prepare for audit day, took much longer than it should’ve.  And if I had been incapacitated or something, I’m sure it would’ve taken the manager three times as long to locate some of the items. So, we’re revising parts of our filing system to make finding certain items more intuitive. And I’m making sure that someone other than myself knows where all of these important documents and digital files are!

I highly recommend that all business owners keep records as though they are going to be audited.  This might seem like overkill, but it’s really not (you need to know where all your company’s money is really going anyway, right?)  I also recommend thinking about keeping records and other crucial company information in such a way that, if one day you disappeared, someone else in the company would know where everything was and be able to make sense of it without you.  Taking these actions ensures security for your business which is always good … and if you happen to be audited, you’ll be ready.

2 Comments on "Surviving an I.R.S. Audit"

Thanks for your comment! Nice to hear from someone from “the other side.”

I would imagine that working in the auditing department could be very tough sometimes…that whole mentality of blaming the messenger. I think most people also don’t even realize that the IRS doesn’t create the tax laws, Congress does.

I also hope that folks reading the post will take steps to be better prepared for an audit. Because it really was pretty easy!

I worked for the IRS many years ago, in the auditing department. It was always a relief when a business owner had all of their records ready. As employees, we had no control over who was audited. I know it can be scary, but the better your record keeping, the easier it is for both parties. I did actually have the joy of getting to tell some people that the audit resulted in a refund! We never really wanted to tell anyone they owed more money. All the audit is supposed to do is make sure you pay no more or less that what is owed. We didn’t get bonuses or anything like that (like some people think) for getting more money. Thanks for sharing your story. I hope anyone else who experiences this is as prepared as you were.