Share this:
We love hearing about people getting excited about chainmaille and crafting, and so when we learned B3 fan Deborah Sacks started a chainmaille club at her school, we had to know more!
Tell us about yourself! 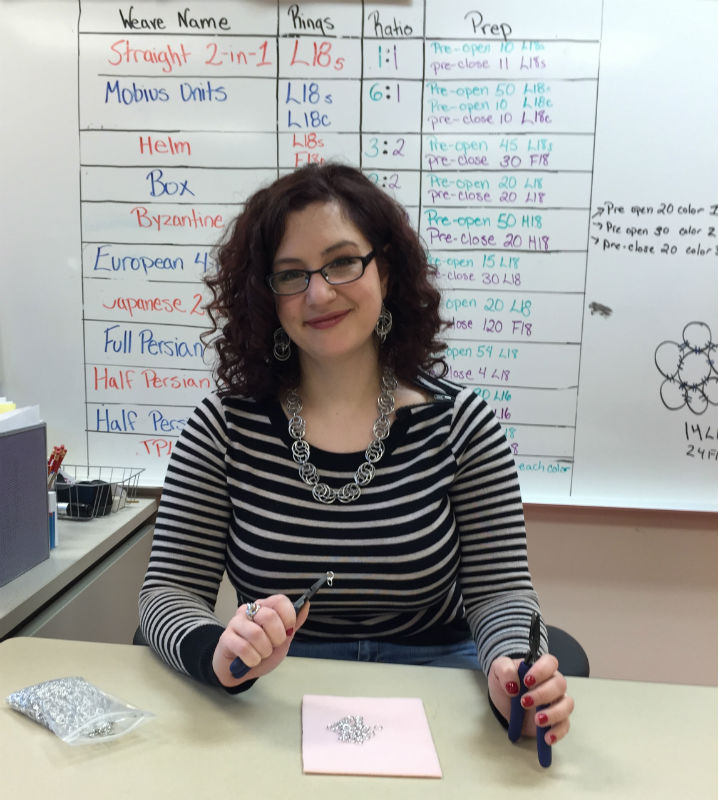 I’m from Boston originally; I moved out to Chicago in September of 2006 right after graduating college. These days I’m a special education teacher at the Edison Regional Gifted Center (ERGC), working with students in grades K-8. I live up in Rogers Park with my husband and our 3 cats.
How long have you been doing chainmaille and how did you get interested?
I became interested in chainmaille the first time I walked past B3, in December of 2013. I signed up for the five week intro course, and it was instant love (or possibly addiction)! For the first several months I took every class they offered and bought tons of supplies so I could start experimenting on my own. After about five months Kat (of Elemental Art Jewelry) convinced me to start my own business (Talespun Maille!), if only so I could afford the supplies to keep going! Over the summer I was lucky enough to work with Dan (of When Rings Dream) at the Bristol Renaissance Faire, which brought my passion for the art to a near-frenzy! These days, I do it more for pleasure and relaxation than for sales, although I do hope to find a couple venues this summer.
How did you start teaching?
I feel like I’ve been a teacher all my life. It started with babysitting, and then in college I worked part-time at a pre-school. I continued working with little kids for several years after I moved to Chicago, and also working in summer camps and after-school programs. That was how I realized I actually preferred elementary age to pre-school (more interesting conversations, fewer bodily fluids). I got my masters degree in elementary education from Columbia College in 2012, and have been a CPS teacher ever since.
It was only natural that when I discovered chainmaille my first thought (ok, second, after “this is so cool!!”) was to share it with my students. I first tried it out over the summer. I was the art teacher at a summer camp, so I taught chainmaille as a specialty class for 20 or so 4th and 5th graders–3 or 4 30-minute lessons for each. They didn’t get very far with it, but it was certainly fun!
How long have you had a program in the CPS? 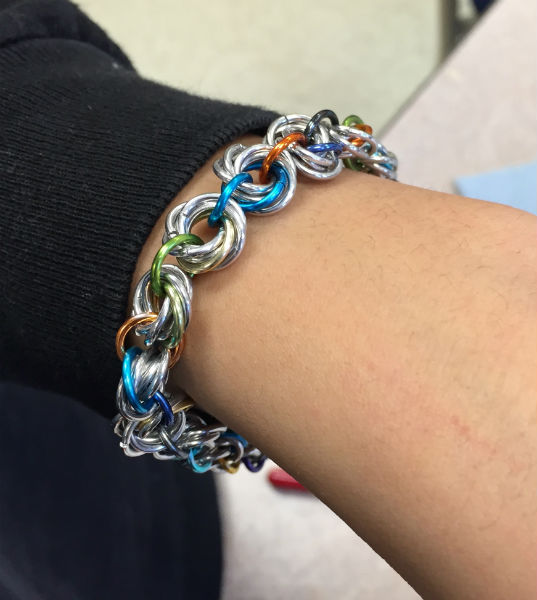 I started this program at the beginning of the school year. Initially I had six students sign up: four 4th graders on Mondays and two 7th graders (plus one of the 4th graders) on Wednesdays. They had a blast! The 4th graders in particular were especially excited about it. It was for them that I started holding “open studio” lunches a few times a week. They campaigned for me, and by the second session our numbers had nearly doubled! Due to a clerical error, we even got a couple first graders signed up. I was skeptical at first but they really wanted to participate, so I gave them a chance. They blew me away with their enthusiasm, their patience, their talent and their determination. Some of them have even taken on leadership rolls, helping each other out with troubleshooting the more complicated weaves.
How many students/ what ages/ from where participate?
I currently have 14 students enrolled, from 1st grade to 8th grade, seven girls and seven boys.  The students come from all over the city.
What do you do during your classes??
These days the sessions actually look a lot like Rebeca’s Guided Learning classes. We start at 3:15 when I bring them up from the lunchroom, and the first 5 minutes are a controlled chaos of everyone grabbing chairs (the rolling chairs are in high demand) materials, and their works-in-progress. They know where everything is and are pretty good about grabbing what they need without making a mess. Everyone works at different speeds so rather than trying to keep them all at the same level I focus on meeting them where they are. A lot of what I do involves showing them how to do a new weave when they’re ready, troubleshooting techniques, and reassuring them that they have in fact done it correctly even though they’re certain it’s wrong. The most important thing I do is get out of the way once I know they’ve got it so they can practice. They work and chat until 4:05, at which point it’s time to clean up. (So about 45 minutes of actual work time each day.) They’re very responsible about making sure that everything gets put back neatly in the right place, and they love showing off their projects to each other. They sometimes get competitive, but I do my best to make sure it’s friendly competition, and remind them that the only person they should strive to be better than is the person they were yesterday. (Cheesy, I know, but a good philosophy nonetheless.)
I also let them come in for “Open Studio” lunches a couple times a week. It’s pretty much the same format, except I make sure they eat before they’re allowed to touch pliers. It gives them an extra 20-40 minutes per week to work.
What does an average class look like?

The first session, I had 4 kids on Mondays and 3 on Wednesdays (one of them attended both days). The second session my numbers doubled to I had 8 students on Mondays and 7 on Wednesdays. Third session starts in two weeks, and who knows how many I’ll have then! Everyone is on different projects, but I do have a standard progression that they’re all going through. They learn the weaves in the following order, which I base roughly on difficulty/complexity:
1. Straight 2-in-1 chain (L18 BA) 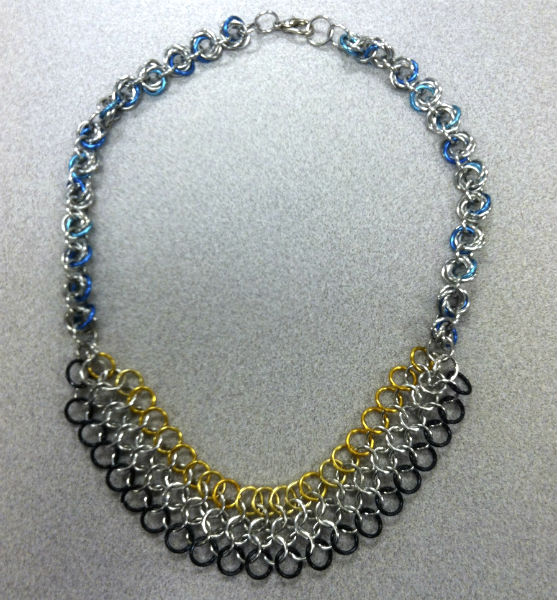 2. Flowers (L18 AA)
3. Helm (L18 BA, F18AA)
4. Box (L18 AA)
5. Byzantine (H18 AA)
6. European 4-in-1 (H18 AA)
7. Japanese 2-in-12 (L18 BA, F18AA)
8. Full Persian (L18 BA)
9. Half Persian 3-in-1 (L16 AA)
10. Half Persian 4-in-1 (L18 AA)
11. JPL 3 (H16 AA)
(As an aside on the progression–for the first session I had them doing Euro 4 right after flowers, but they really struggled with it–took most of them more than a month to do a 7″ strip of 5 rows. I discovered that delaying it until after they’d done box and byzantine made it easier for them to pick up the pattern. I also found that L18 is in BA is the easiest for them to manage the opening and closing given their smaller hand size and strength.)
They’re all at totally different points on the progression, although almost everyone has gotten at least to helm and no one has reached HP4 yet. (As far as I know…one of my students taught herself HP3 over the weekend, so who knows how far they’ll go over the break!) I’m still debating where to go with it once they’ve mastered JPL3…possibly onto the viper weaves, or I might challenge them to do some research on their own to figure out what weaves they want to master next.
How do you fund the program? Do you accept donations?
ERGC funds its after school programs, mine included through a grant from a city-wide program called After School All Stars (ASAS). That money is enough to cover my salary with a tiny bit left over for supplies. The first session we had to supplement that by charging a materials fee to the participants, to cover the initial costs of pliers, rings, bead mats, etc. However, even with that it wouldn’t have been possible to keep it going without B3’s generous sponsorship! They’ve donated thousands of rings and, when enrollment doubled, sold us pliers at a significant discount.  So yes, we happily accept donations!
Thanks so much for taking the time to share more about you and your students Deborah!
You can find more of Deborah’s work at Talespun Maille on Etsy and Talespun Maille on Facebook.

2 Comments on "“Ask an Artist” series: What’s it like to teach chainmaille to younger weavers?"