I’d like you to meet a student of mine, “T” (name obscured for privacy). T was 7 years old when I first got a message from his mom. He’d recently discovered chainmaille at a Renaissance Faire, and his mom shared a photo of the European 4-in-1 he’d made at the faire. She described how excited he was about chainmaille. We chatted over several emails, and I set him up with multiple additional projects to develop his skills.

Fast forward to a few months later, and I get this message from his mom:

“Do you think for my [8th] birthday we can ask Rebeca to make something for me that’s really really hard?”🤣🤣🤣🤣🤣. The idea that my boy is asking for chainmaille for his birthday cracks me up. I told him a compromise could be that we pay you to teach him something “really really hard”.

Awww! A 7-year-old boy wants to spend his special day with me learning chainmaille. No offense, adults, this was probably the coolest birthday request I’ve received.

I sent a list of 5 potential weaves over. I remember debating putting Dragonscale on the list. I mean, it’s difficult enough for most adults to learn. But I figured, “what the hey, there’s an 80% chance he’ll chose one of the other weaves.”

Of course. He. Picked. Dragonscale. 😂

Before T arrived, I created a starter piece for him so that he could “get into the groove” right away, and then we could learn to start a piece from scratch at a later time. (I do this with a few tricky chainmaille weaves, as I find it’s easier to start a weave if you already know how to make the weave.)

I walked him through the steps of Dragonscale and quizzed him to make sure he could figure out what step was next based on looking at the current state of his weave.

It was slow going, which in all honesty is completely expected for Dragonscale. (In my years of teaching, I’ve only had 2 students complete their Dragonscale cuff in a 3- or 4-hour class). T had about an inch and a half completed when the lesson was up. His mom had the brilliant idea of videotaping me doing the weave, plus me doing a demo of the particular point in the weave that kept tripping him up. And with those videos and a set of paper instructions, I bid him luck!

A few weeks after the lesson, I got an S.O.S. message to help T troubleshoot a mistake that he knew was there but couldn’t figure out.

Mistake successfully troubleshot. Back to the grind. I knew from his mom that he was chipping away at this cuff, one ring at a time and determined to finish it.

About 5 1/2 weeks after the lesson, I got a text with some completed photos! He’d finished! 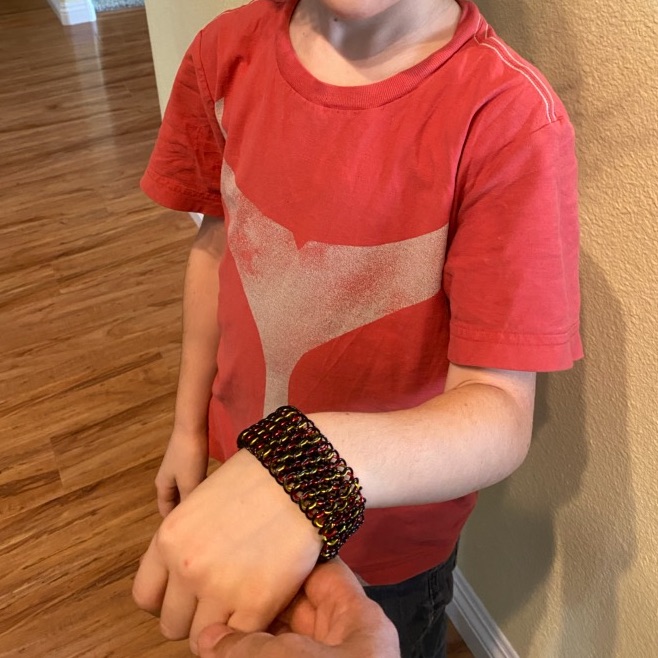 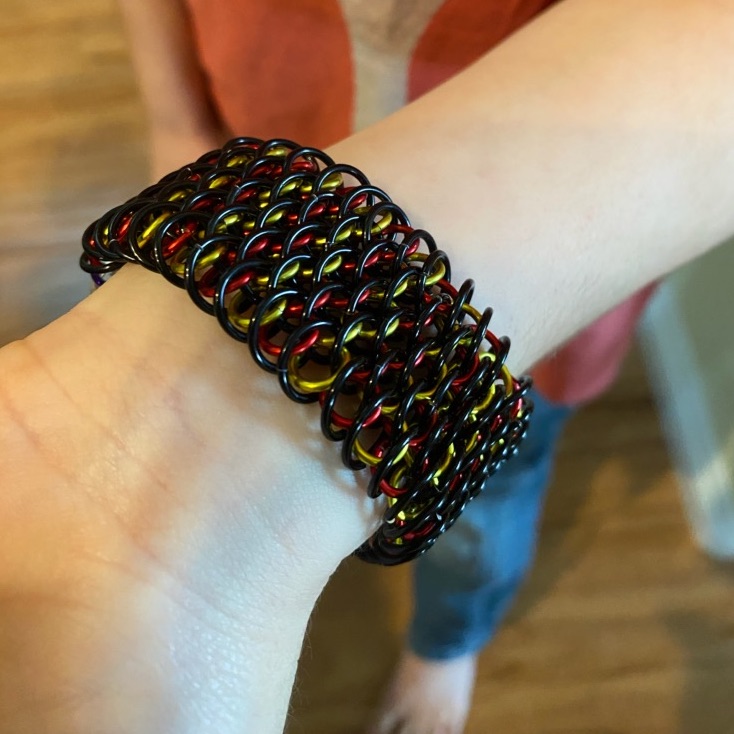 I actually squealed out loud and clapped my hands when I saw the photos. I felt so happy for him that he finished, and also, I was majorly impressed by his dedication. I suspect there can’t be more than a handful of 8-year-olds in the entire world who have finished a Dragonscale cuff on their own, so this is quite an accomplishment.

We’ve all heard the mantra “Don’t give up,” and we all know this is easier said than done. This mindset comes naturally to some people, and it has to be nurtured and developed in others. Based on T’s persistence with this weave, I have a feeling it’s natural for him to work to finish something he’s passionate about, and I think this will serve him so well in life!

Congrats, T, on making an amazing piece of jewelry!

Stay tuned for a challenge for YOU to finish a piece that’s been hanging out on your worktable for far too long. Let T inspire you! If you have any words for T, feel free to leave a comment below, as I know his mom will show him this post.

6 Comments on "In Case You Want To Give Up On Your Chainmaille Project, This Kid Might Inspire You To Keep Going"

Persistence will get you anywhere you want to go. Shoot for the moon. You are amazingly persistent.

Thanks Dorothy! I was amazed myself watching him grumble through his troubling spots yet continue to persist!

I must mention though how incredibly amazing Rebeca was at teaching the weave, and patiently helping him. She really was a huge inspiration to him. Still is!!

Awww, thanks Yvonne. It was truly a pleasure teaching T and his siblings!

Great job T! Dragonscale is hard and you conquered it! You kept going when a lot of people would have given up. When you knew there was a problem, you tried to figure it out first and then you asked for help. So many things in life will be hard like dragonscale—just remember that by doing a little at a time, thinking about problems, and asking for help when you need it, you will be able to tackle anything that life throws at you!

Thank you Shellie for such inspiring and truthful words. I will be sure to share these thoughts with him.