The team of people that makes Blue Buddha work is a multi-talented one (for proof – check out our B3 Talent Show from last year’s employee retreat!)  While our web guy Matt is best known around here for making our website work (a very important role for an online business!) and even more well known by some as being the man behind Graveyards of Illinois, only a close few may be aware of his culinary talents.

Part of Rebeca’s weekly dinner group, Matt is known for taking on some epic ideas when it becomes his turn to host the meal.  This month however, he took it to a whole new level recreating the first class dinner from the Titanic to honor the 100 year anniversary.

We knew many of you would get a kick out of seeing what he created and reading about how he did it.  Continue reading below to find out how a meal from 100 years ago got reinvented for this special occasion.

How did you come up with the idea to recreate the dinner from Titanic?


I’ve always liked the Victorian/Edwardian aesthetic – mainly because of my explorations of graveyards and architecture from that period.  This year, I’ve been watching Downton Abbey, which put that time period, and that style, back in mind again.  With the 100th anniversary coming up, it seemed a natural choice, and I didn’t want to let such an occasion pass without doing something to commemorate it. 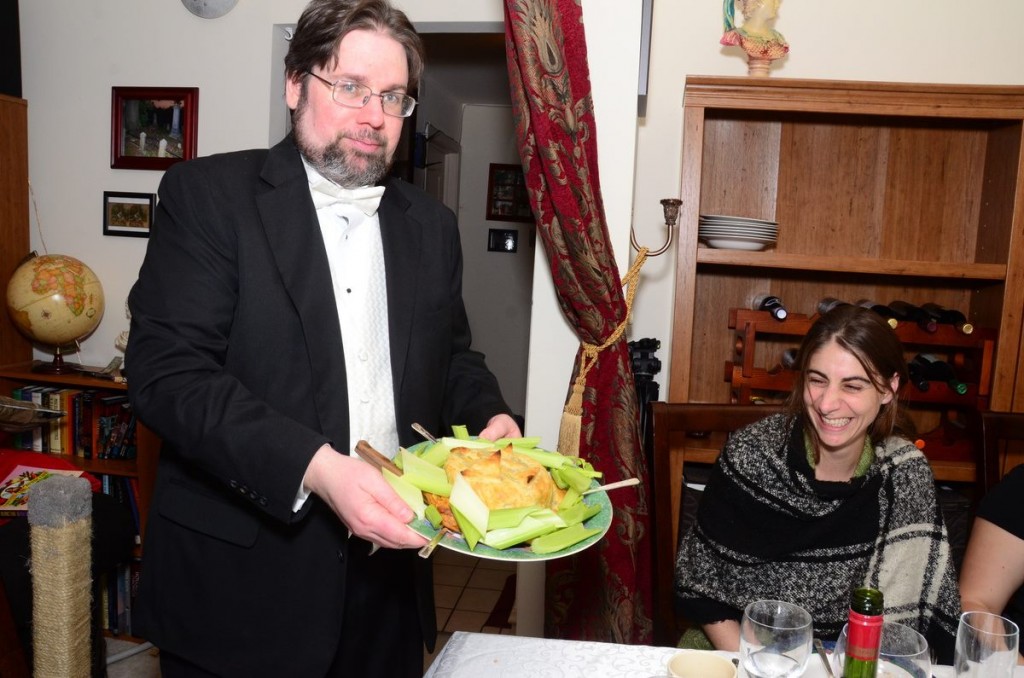 How much research went into it?  When did the planning begin? 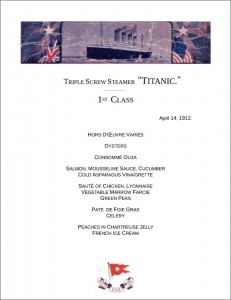 Thankfully, others have done the research for me, so I had only to follow directions.  There’s a book, Last Dinner on the Titanic, with all the recipes required, photos of the ship’s interior, and plenty of logistical suggestions. There are also blog posts, with photos, from others who have cooked this menu in the past. I started planning it in February, a few days after the previous occasion where I’d hosted for the group.

Menus from all three classes of accommodations survived from the last day – some of the survivors or victims had put them in their pockets earlier.  I ordered the book, and used the menu images I found online to make my own menus.  My menu uses items from the first-class menu, but the letterhead and typography of the second-class menu – visually, it was more interesting. (click on the image to the left for a larger view of one.)


Because of the dietary needs of your dinner group, you adapted everything to be pescetarian (and even healthy/low cholesterol etc.!)  How difficult was that to do?


To the Edwardians, the four basic food groups were meat, fish, cream, and alcohol – not a fresh vegetable in sight! Fortunately, the menu was extensive enough that I had plenty of items to choose from.  The original first-class menu had twenty-four items on it (not counting sauces and garnishes), and I chose only about half of those – eliminating the meat dishes entirely, but accurately reproducing the fish dishes, with a few minor substitutions: Earth Balance instead of butter, almond milk in the place of cream, mushrooms or mushroom broth in the place of meat. 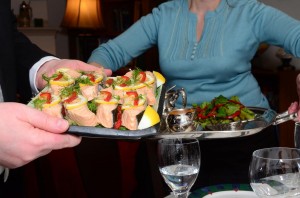 The mousseline sauce for salmon, for example, is a hollandaise with whipped cream folded in.  I made the hollandaise as usual but then used almond milk instead of whipped cream, which gave an entirely different texture, but probably tasted close enough to the original.   I used that same substitution for the minty green pea timbales (pureed pea and mint baked in custard cups) and there it made even less of a difference.  For the sauteed chicken, I used Quorn, an artificial meat substitute that has the texture of chicken, and a similar mild taste.  And making “pâté de foie gras” out of shiitake mushrooms and walnuts instead of goose liver is both considerably healthier and much less cruel.

One dish I wanted to do was “Vegetable Marrow Farcie” – marrows (zucchini) hollowed out and stuffed with their own cubed flesh, rice, mushrooms, cheese and herbs.  It turned out to be impossible to find zucchini of the right size this time of year in Chicago – none were more than an inch and a quarter in diameter.  So, I ended up dropping that item at the last minute, resulting in a very fish-heavy menu, with shrimp, oysters, scallops, and salmon.


Which was your favorite course? 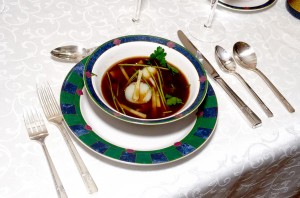 Consommé Olga.  Several pounds of mushrooms were reduced to a few cups of broth, which was also flavoured with imitation beef bullion, wine, bell pepper, celery and parsley; the broth was wonderfully complex, rich, and aromatic. It was then served with a scallop and other garnishes, providing a contrasting taste and texture.  (Matt was generous enough to share his recipe for this dish – check it out at the end of this post!) 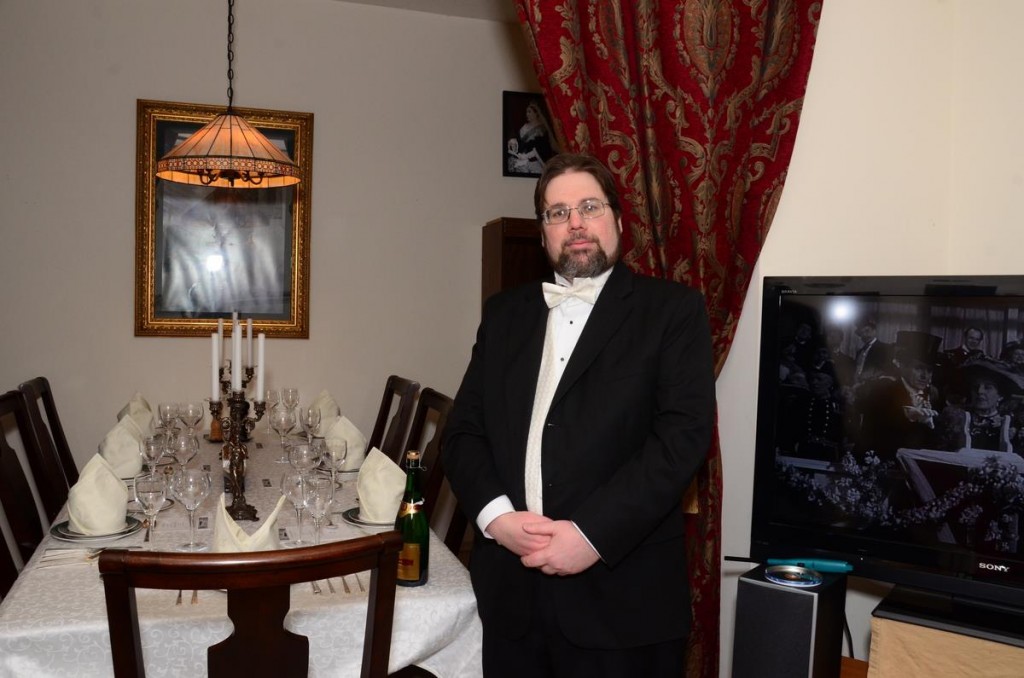 Never one for skimping on the details, you added other historical touches too didn’t you?  What were they?


A week before the event, I mailed reproductions of a Titanic first-class ticket to the guests – copies of the only surviving ticket, that of a vicar who missed the boarding because his wife was ill.  Guests were encouraged to dress in Edwardian fashion, and several wore long dresses, lace, ruffles, or elaborate feathered hats.  I myself wore an approximation of a gentleman’s evening dress, with white vest, white bow tie, and black suit jacket (though, more properly, it should be a tailcoat, but I didn’t want to spend a fortune).

When the guests arrived, the 1958 movie A Night to Remember was playing on the television, and a 20-inch wooden model of the ship stood at the center of the table, flanked by bronze candelabra.  Each place setting featured a napkin folded in the same style used in the Titanic’s dining room (as shown in a photo from that era) and a printed menu, with the letterhead and typography imitating that of the ship’s actual menus.  During the meal we listened to an album of music that had been played aboard the ship, such as “Orpheus in the Underworld” and Scott Joplin’s work.  We drank a toast to the shipbuilding company’s chief designer and naval architect, Thomas Andrews, who went down with his ship; he was last seen standing sorrowfully at the fireplace in the room to which the passengers had retired after this dinner was originally served.


You achieved Titanic greatness with this meal, what’s your next epic dinner going to be?


No idea; it’ll probably be another year before I do something as complex as this.  I’ll be hosting again for the same group of friends some time in May, but I’ll take it easy next time.  Sushi, maybe, as that always goes over well, and there’s not as much washing-up to do.

The Consommé was a hybrid of two recipes – the broth came from The New Now and Zen Epicure, a vegan cookbook by Miyoko Nishimoto Schinner; the solid bits came from Last Dinner on the Titanic, by Archbold & McCauley.

To serve (as “Consommé Olga”):