The End Product Is A Mess, But I Had Fun Trying!

I spend the vast majority of my creative energy on chainmaille, and while that will probably always be my focus, I love stepping outside of my comfort zone to learn a new skill—usually jewelry-related, but not always.

Sometimes I take a class and wind up up creating something amazing in a class—like my first (and only!) polymer clay pendant or the silver knot ring made from a single strand of wire). Other times, the end result is, frankly, not nearly as awesome.

Last month, I attended the amazing Craftcation conference. I mostly took business seminars, so I was definitely excited about the sole craft class I signed up for: a crochet cowl. I’ve never done crochet nor knitting, so I had no idea what to expect. Well, no, that’s not quite true. Based on my chainmaille experience (and my experience teaching that artform), I figured I would probably have a steep learning curve right at the beginning, and then, once I “got it”, I would find my “zen” zone and settle into a soothing and meditative rhythm.

That’s, *ahem,* not quite what happened.

The class started easily enough. Our yarn came in a hank instead of a skein. (Hey, check me out, learning new crafts jargon!) The first thing we needed to do was turn the hank into a ball of yarn so we could easily pull from it as we worked. 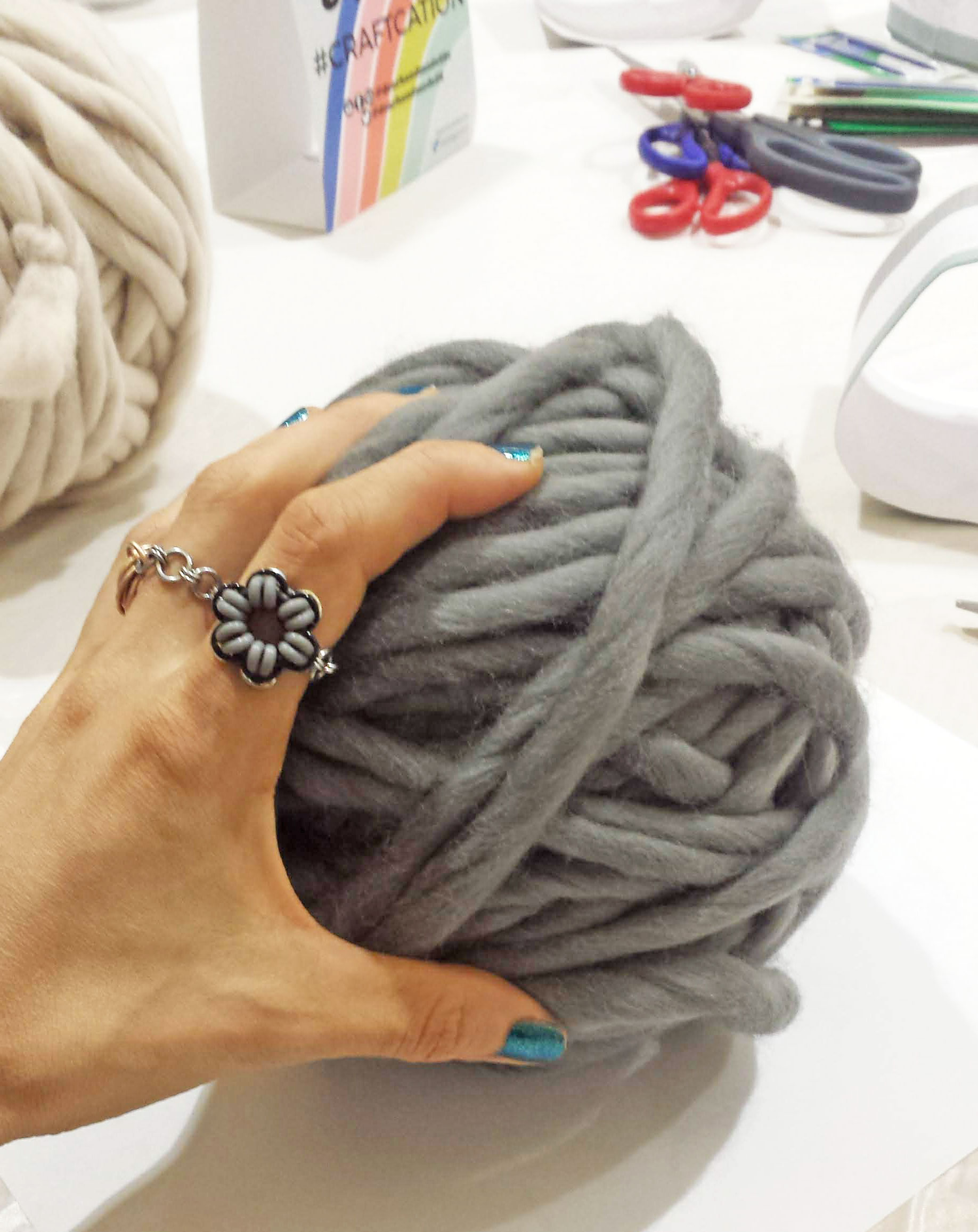 This just took a few minutes and by then, I was feeling pretty accomplished and ready to tackle the next challenge.

We were going to do double stitch crochet, but first we needed to create a foundation row to work off of. It took me a while to get going on this. I’m a kinesthetic learner, which means I learn best by doing. I watched the instructor as best I could, but I had a real difficult time translating her movements into my point of view, and trying to get my fingers to do the same thing. Eventually I got the hang of it, and found it quite easy … BUT I had no idea at the time that what I was making was way too tight. 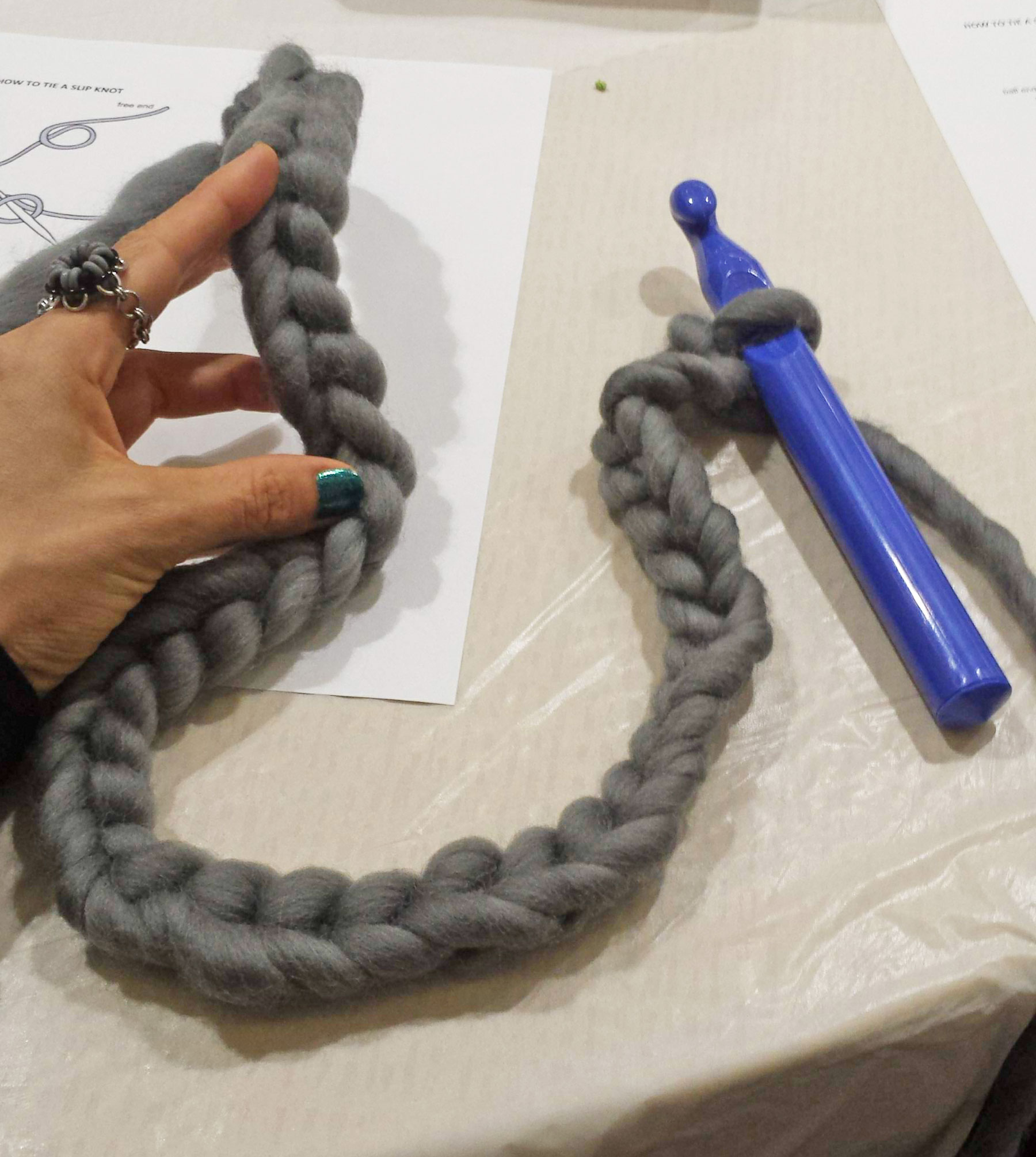 It was downhill from here. We moved on to adding rows, which involved a lot of language like “yarn over” and “pull through” and while I dutifully repeated those phrases as I worked, I really had no idea what I was doing. There was someone at my worktable table who had done crochet before and she was very generous about helping everyone … but honestly I think I probably would’ve needed about 20 minutes of one-on-one time to learn to double stitch properly.

Seeing the clock tick down, I knew I wasn’t going to finish my cowl during class, but I wanted to get as much done as I could. I thought that if I could get the muscle memory down, then I could take it apart and re-do it once I got home. So, I kept going, mumbling “yarn over, pull through” along with a lot of expletives. At the end of it all, I had this: 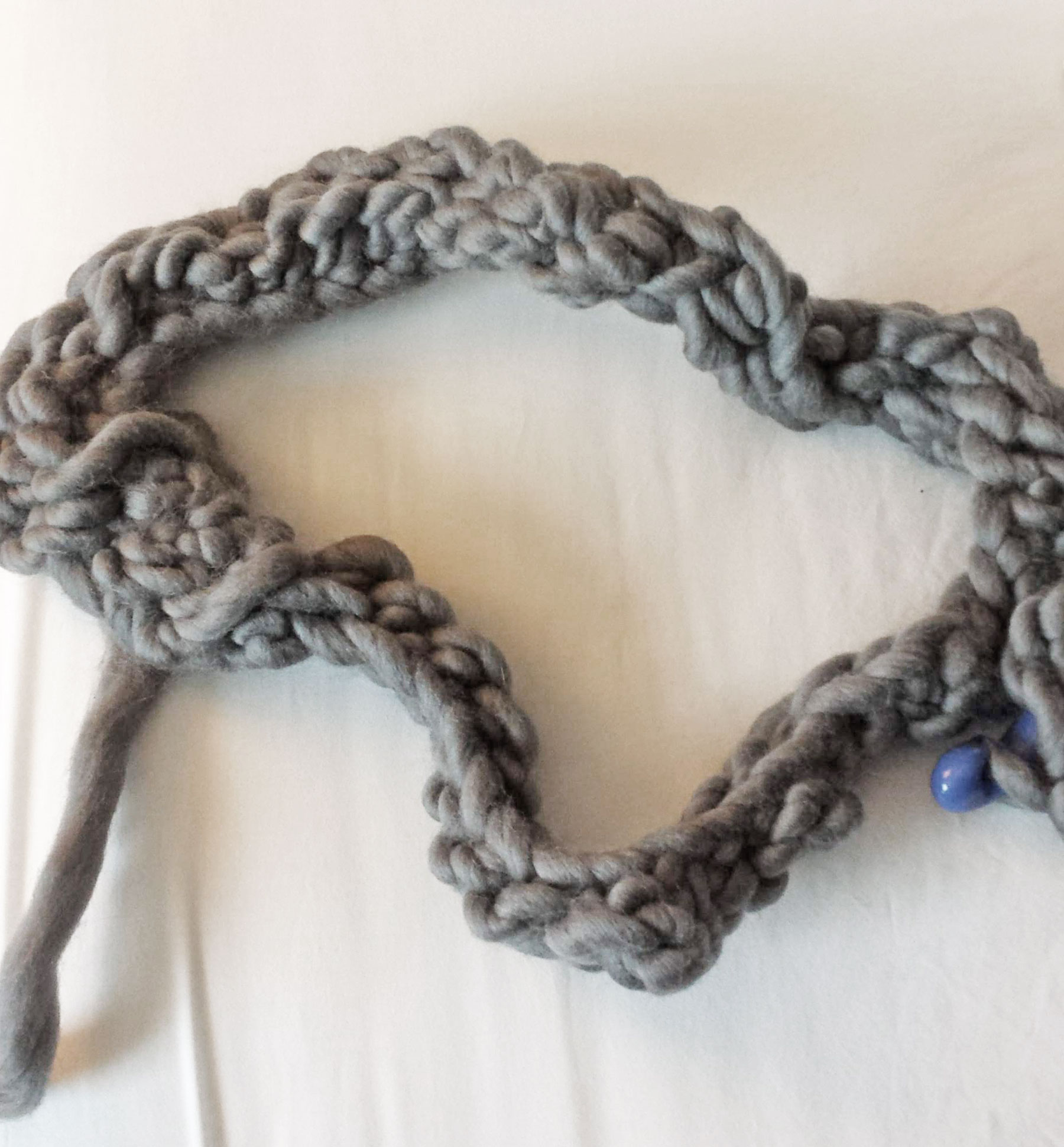 I don’t even know what to call this thing. It’s definitely not a cowl.

Back in my hotel room, I couldn’t stop laughing at how ridiculous it looked. I sent the photo above to a close friend who makes amazing crochet pieces. Her response had me cracking up even more. 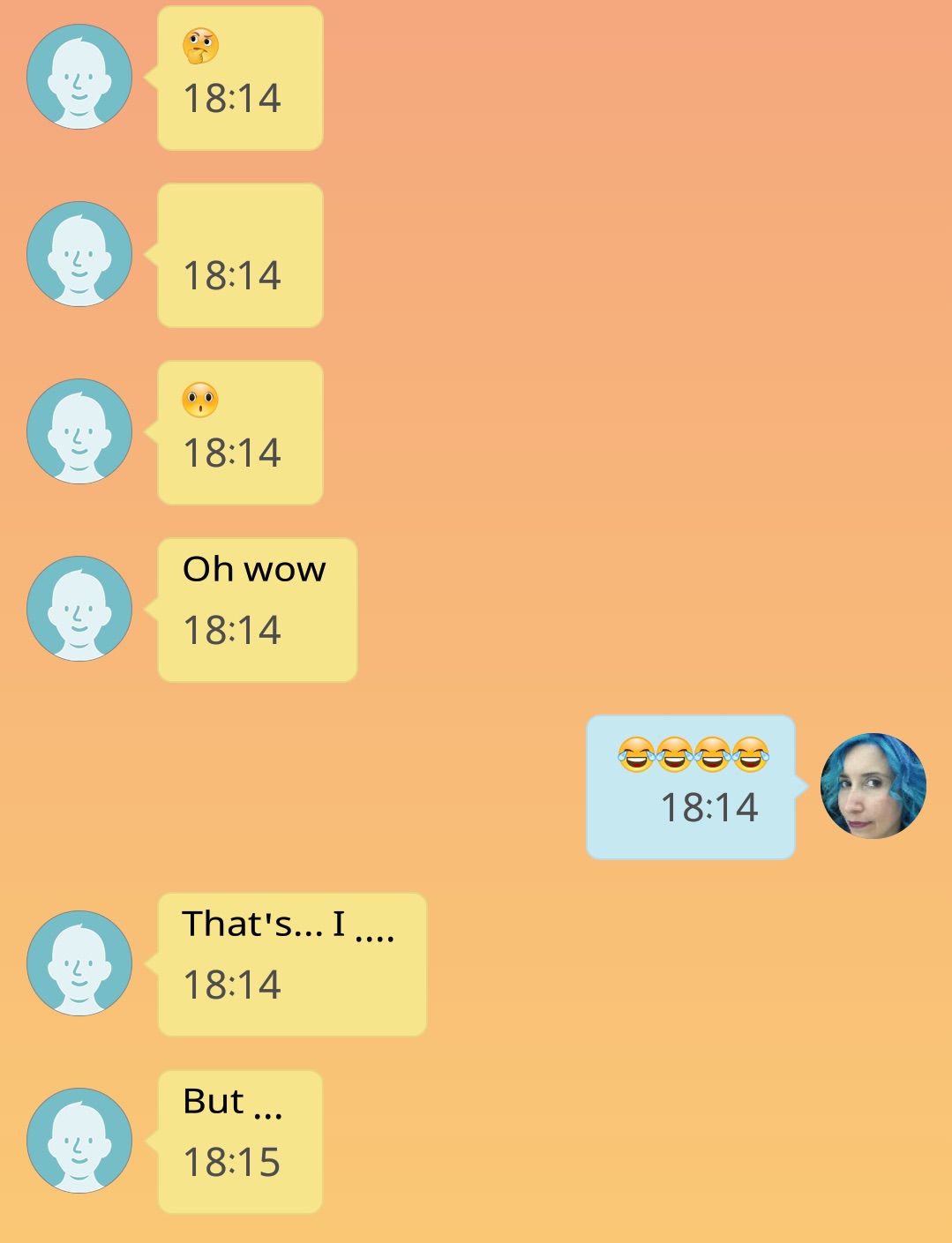 But, you know what? Even though I had no idea what I was doing, I still enjoyed the challenge of learning something new. My brain was super happy doing this, and I even surprised myself with how little frustration I felt. I had no ego in the game, I was just in it to have fun. I can be such a perfectionist with my chainmaille work, it was liberating to let go of perfectionism and just embrace the experience for what it was. It was also valuable to me as an instructor to remember how students can feel when they take their first class; I believe it makes me a better teacher when I have sincere empathy in relating to “being a newbie”. 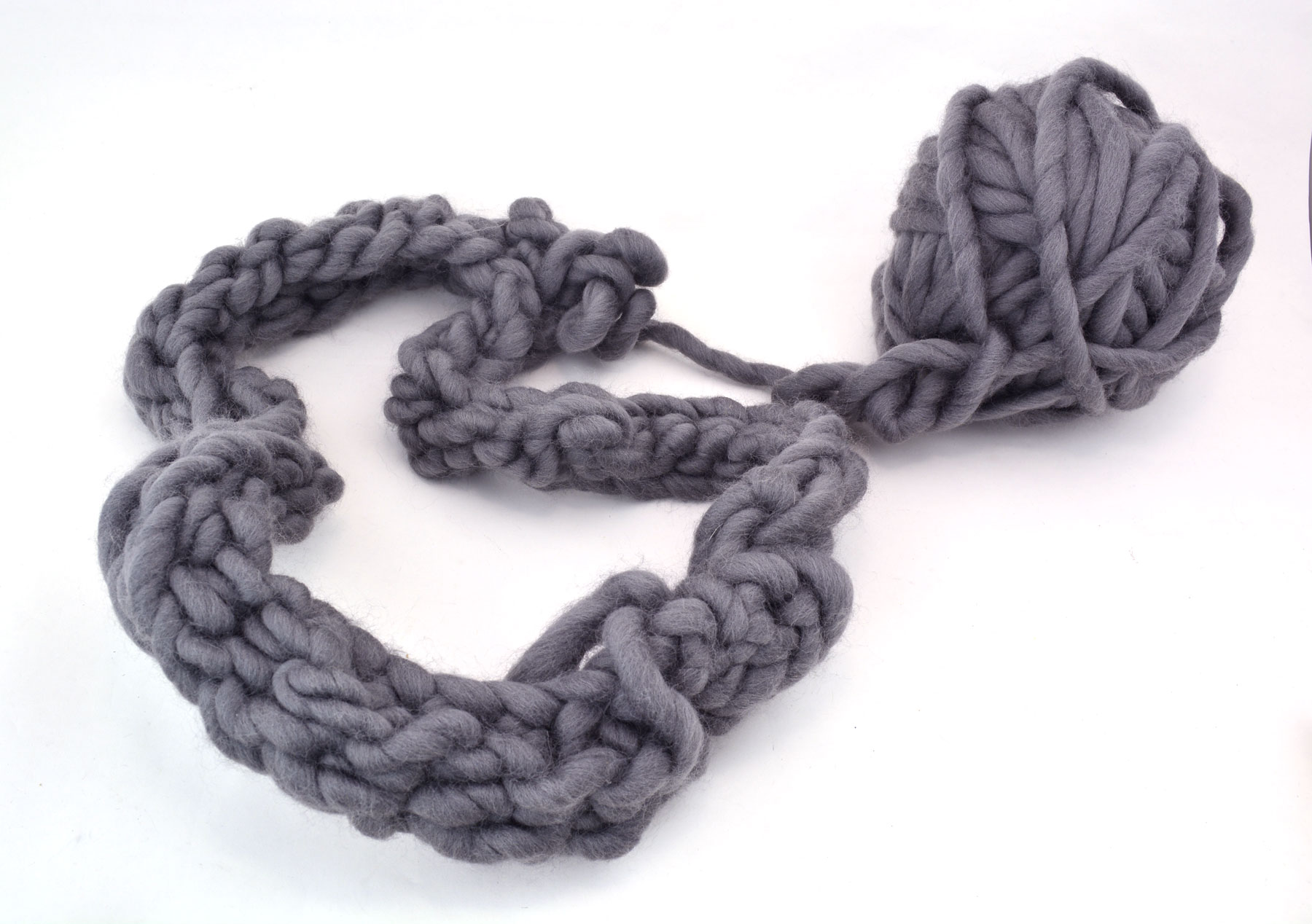 I was hoping to finish off this blog post with a photo of my completed piece … but sad to say, after undoing it, I was unable to complete it on my own. (Heck, it took me about 10 minutes just to make the slipnot at the beginning!) I re-created the first row, and while it’s much looser this time around, there’s definitely a mistake or two in it. (How on earth does one screw up the beginning?!? Leave it to me…) Just for 💩 & giggles, I tried to start the double crochet part to see if could still do it, but it wound up being an even bigger mess than the first time around. So I’ve aborted for now. The next time I’m in Chicago, I’m gonna see if my friend will give me some one-on-one guidance, because I’m still convinced that once I understand what I’m supposed to do, I’ll be able to do it, and it will be easier than I’ve been making it out to be. And I am determined to finish this cowl. I don’t care if it take me 10 years, I will make this yarn submit!

Do you have DIY fails of your own? I know I’m not alone — feel free to share your stories in the comments section below.

I have trouble with crochet being too tight, also – but mostly I knit. (My personal opinion is that knitting started when someone dropped a couple of mandrels of uncut wire and then they tangled and got flattened, and in trying to reproduce it they discovered garter stitch. Srsly, knitting needles are pointed mandrels, and the yarn gets wound around them.)

Also, check out the cover of Diane Duane’s story “The Landlady” – it’s a variant on Byzantine!

I have tried to learn both crochet and knitting many times, but because I am left-handed no one is able to teach me properly. My grandmother was from Ireland and crocheted and knitted some amazing pieces of clothing, but I guess I’m just not going to be able to follow in her footsteps. I even tried bead crochet recently, but still couldn’t do it.

Oh that’s a shame that there aren’t any left-handed instructions! 😢