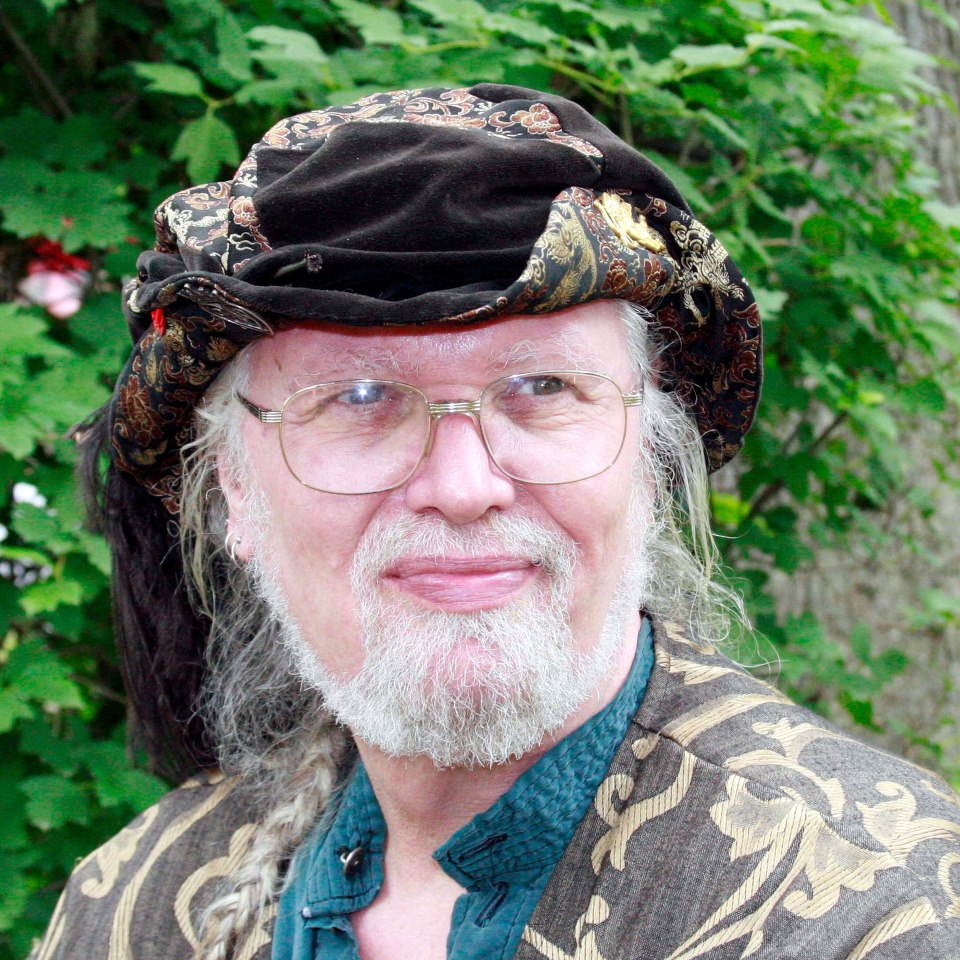 Scrolling through the ChainMaille Fashions page on Facebook, and the ChainMaille Fashions website, it is amazing to see the sheer amount and variety of pieces Lord Randolph and his team have created over the years. You’ll find an incredible archive of hundreds upon hundreds–thousands, really–of photos of chainmaille clothing and accessories, each a little different and always sized to fit the client just right. One constant: so many happy faces of people clearly loving what they are wearing. As one fan wrote on Facebook,”Randolph, you & your team have the ability to make ordinary people feel & become extraordinary!”

Every month in our Meet the Artist series, we chat with a different chainmaille artist to find out more about their process, history, inspiration and goals. We also try to uncover one or two things you might not know about the artist, even if you’re already familiar with their work.

In this edition, you’ll meet artist Lord Randolph Markham. Together with Jane Markham, Jo Woolam, and their team, they are ChainMaille Fashions. They’ve vended at multiple Renaissance Fairs across the US for the past four decades, so you may have even seen their work in person.

Enjoy getting to know Lord Randolph below! 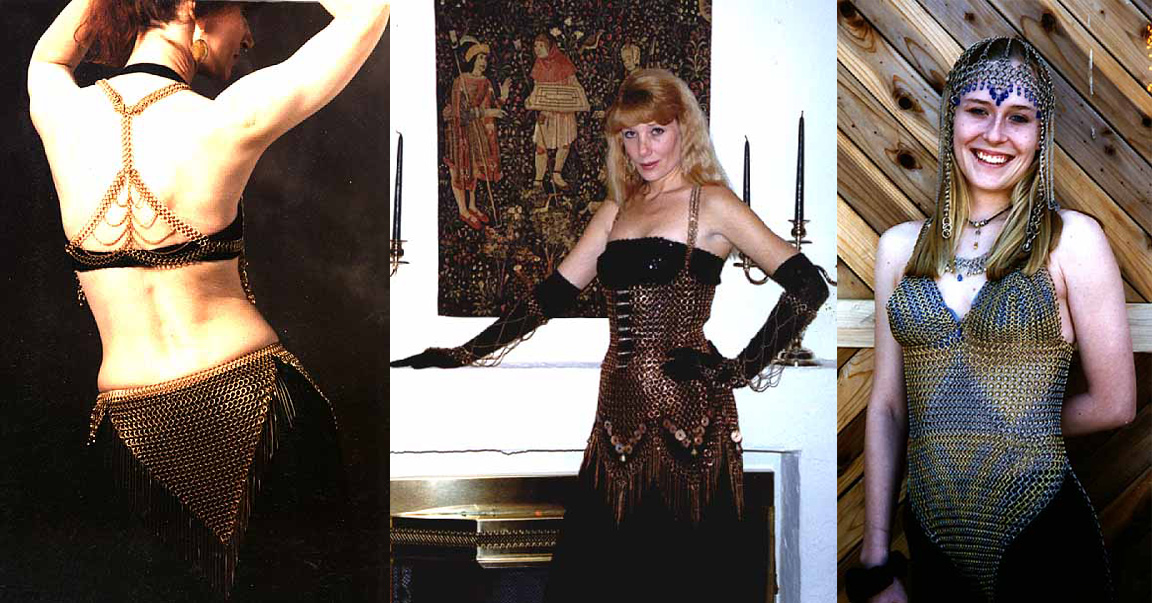 Thanks for taking some time to chat with us, Lord Randolph! When and why did you start making chainmaille?

In 1975, I was unemployed scratching out a living making candles and I did a show that was a fundraiser for KPFK community-sponsored radio. The Society For Creative Anachronism (SCA) were doing demonstrations and one of them let me wear a shirt of maille. I was hooked. I ordered one from him and paid $100 deposit. A year later when he still had not started it and did not have money to return my deposit, I took his pliers and his small supply of rings and started one myself. It was the last piece I ever made in rust-able metal.

The photo below is not that first shirt, but one of the earliest pieces you made, back in 1978. I love that you’ve got such a great photo archive of your work! 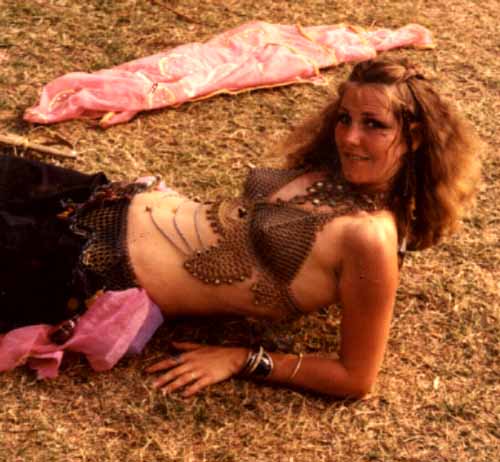 I know your wife also makes maille … did you two meet at the Renaissance Fair? Has maille always been a part of your lives together?

We met before chainmaille. I had taken a position as navigator and crew on am brand new motor/sail boat from Vancouver to Jamaica by way of the Panama Canal and we stopped in Ft Lauderdale to refinish the teak before we delivered it. I met Jane there.

How did you get started vending at the Renaissance Faire?

Jane had been cutting coins for a wholesaler when we met but I knew the craft circuit from candle making. The KPFK show we did was the first thing we did together and Pegasus Coin and Candle. We had applied to the Southern Fair but were rejected until we applied as ChainMaille. We started at the Texas fair in year 4 and added Minnesota Renaissance Fair and Southern Fair the next year. 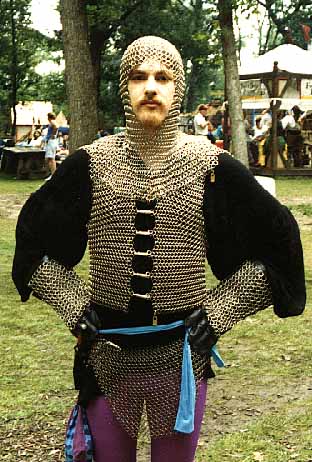 What’s the hardest aspect about being an artist at the Renaissance Faire? What’s the best?

Hardest: dealing with management (they are all kind of dysfunctional).

Dealing with patrons can be the best especially for me. Dressing people bonds us quickly. 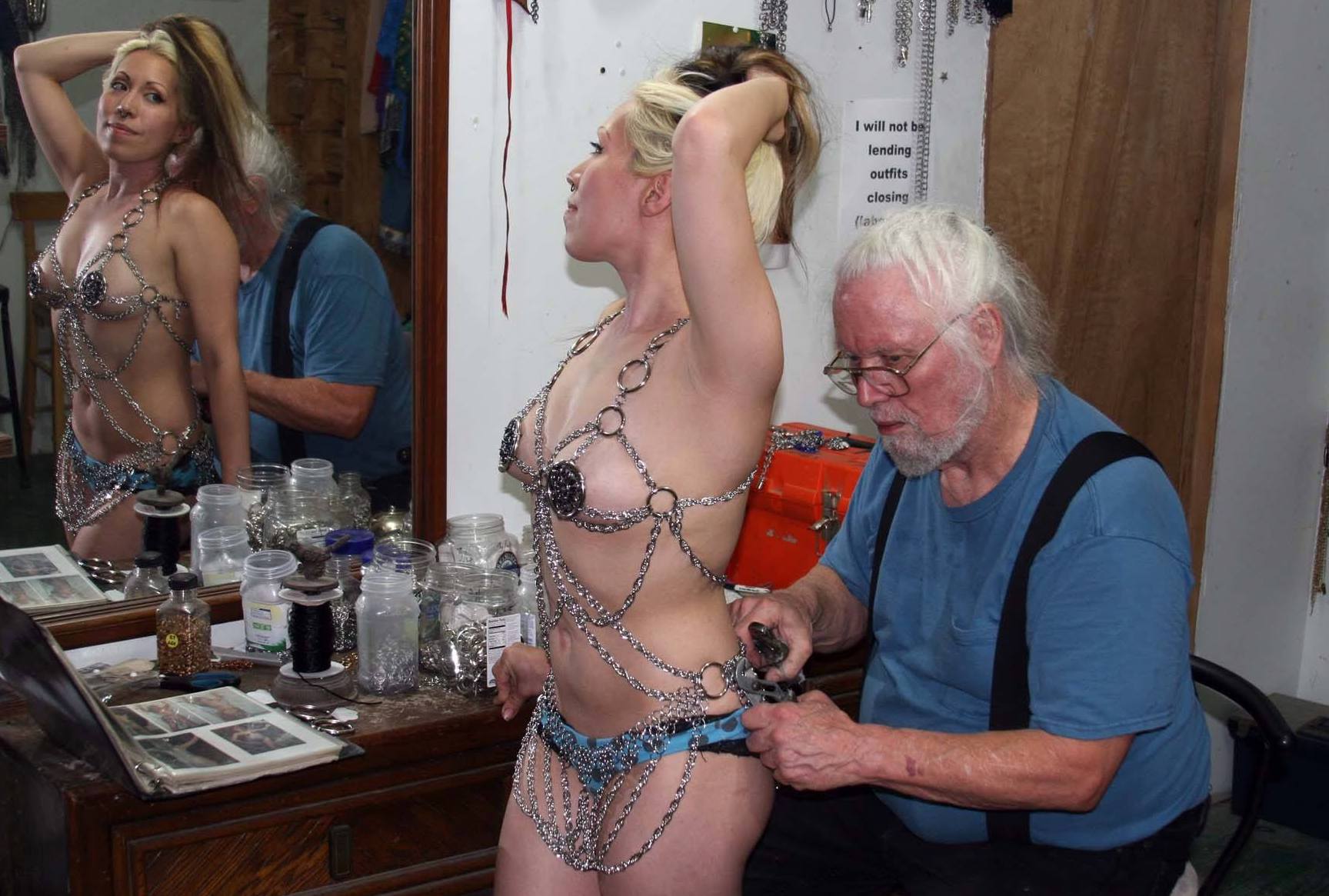 Haha, I’ll bet! How many states have you traveled to with your wares?

Too many and I don’t talk about anything that happens in the dressing room … but here’s one that sticks out and is sharable. Twenty-five years ago at Bristol, I had a group of 5 coeds who came together regularly to dress. A few years later they all graduated the same time and then married about the same time so you can guess what else they all did about the same time. They were all dressed in chainmaille so we agreed to let them come use the AC in the dressing room when it was time to nurse. They always chatted together like I was not in the room and I know way more about nursing than any man should!

How did the “Lord” part of Lord Randolph come to be? 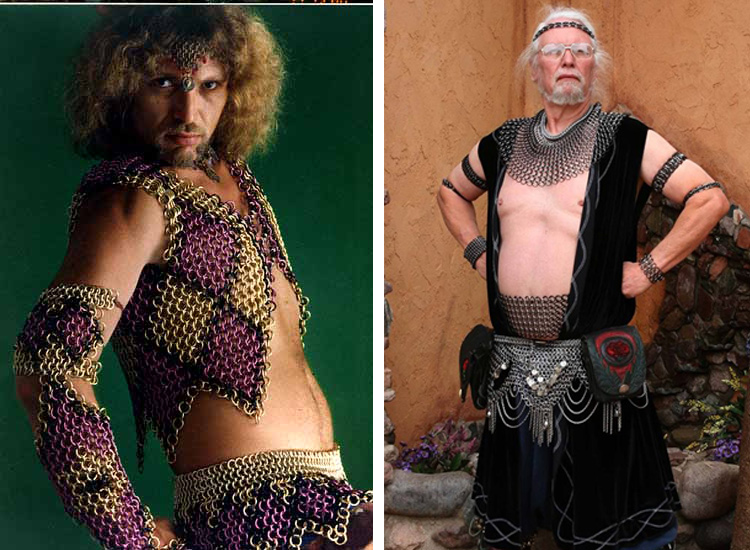 You’ve been making chainmaille a long time. Could you offer your thoughts on how the industry has evolved over the years?

There was no industry when I started. Only Whiting & Davis making stuff for butchers and lumberjacks. So everything has changed. 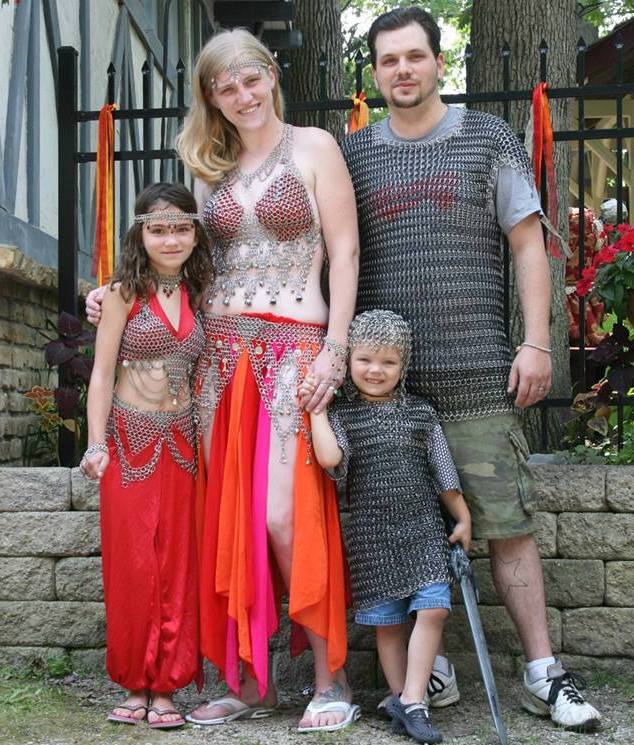 My clients. Most of my ideas are developed because they were asked for and I have always thought if one person wants it and if they are 1 in a million, then there are 8,000 others that would want it also. The stuff I like the most is not sharable, not advertised or pushed in any way but I get asked for strange stuff all the time.

Well, this piece isn’t strange, but I for one love this … Baby’s First Chainmaille! 😄 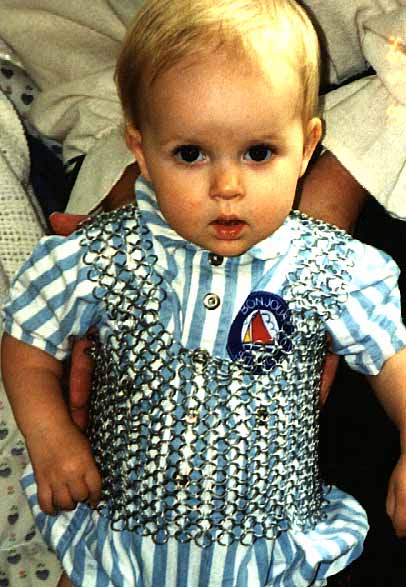 How many hours a day do you weave?

Now or in the beginning? Early on, Jane and I would work a few hours in the morning watching the morning shows. The middle of the day was for working on books or booths then 4 or 5 hours in the evening watch TV and knitting. 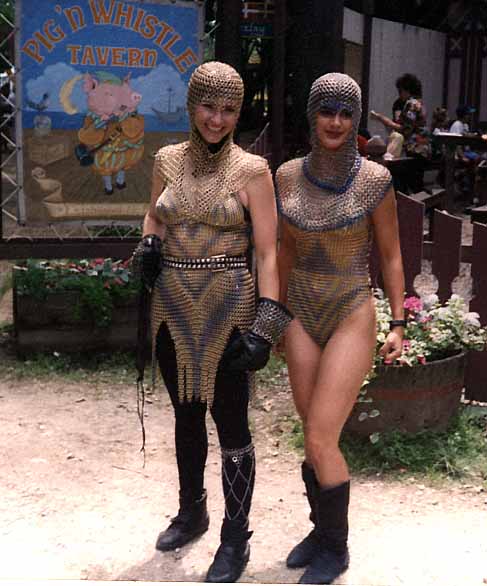 What is your current goal?

Semi-retirement! I have sold Minnesota Renaissance Faire and am trying to sell Bristol. At 70 years old, I have no mortgage and enough solar, so don’t have an electric bill, which means I can do quite nicely with just 2 shows. For the Texas Faire, I have a HUGE fan base who I tap to do repairs and cleanup of my building two weeks before opening, they also unload and distribute my inventory. Arizona is not a big show but February and March are nice there; the booth is low maintenance and the show is an easy 10 am to 6 pm. Sustainable for an old man.

Hmm, I think I’m gonna have to head out and visit the Arizona show to see your wares in person! I saw your shoppe at Bristol, but it’s been years. What is one tool that you cannot live without?

There are several, my pliers, my truck and my partners top the list. What general advice would you give to someone who wants to make a living in the Ren Faire scene?

Start with local craft shows and listen to the feedback. To start you need a niche. When you have been doing it as long as I have … well, I very rarely make anything new because I can’t even replace what I sell right now! Part of why I need to sell Bristol. 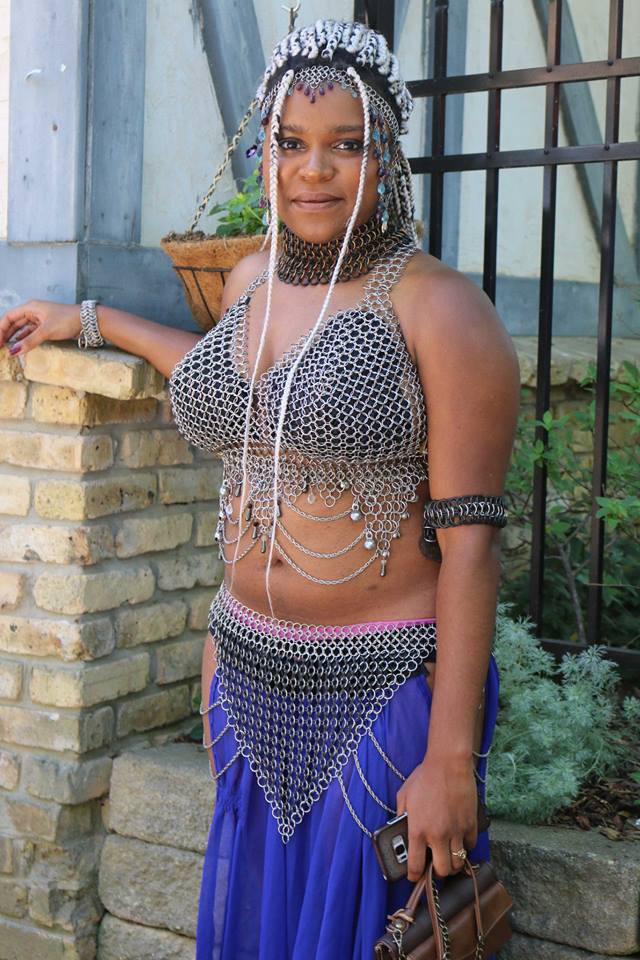 OK, onto some quick questions: What do you do when you aren’t making chainmaille?

Garden and play Everquest but we are “in production” year round.

Do you listen to music/podcasts/tv/etc while mailling? If so, what are your favorites?

What would your superpower be and why?

I can talk strangers out of their blouses in a minute or two 😉.

What’s the best piece of advice you’ve ever been given?

Never be the first to release a hug.

What’s one thing Blue Buddha readers might be surprised to know about you?

I think I will leave them surprised.

Also, I think it’s worth noting that you probably have some of the earliest photos of cats in chainmaille and dogs in maille on the entire internet:

Before we let you go, please tell us where we can find your chainmaille.

Thanks so much for taking the time to chat with us, Lord Randolph! We wish you much continued success and are so thankful for your decades of inspiring people to embrace chainmaille.

And thank you to everyone who’s read this interview to the end. While you’re here, be sure to check out the previous “Meet an Artist” posts: http://www.bluebuddhaboutique.com/blog/category/ask-an-artist-series/ and let me know if there’s anyone you want to see interviewed. ‘Til next time, happy crafting!