In this edition of Blue Buddha’s Meet the Artist series, we’re reaching out to the other side of the pond to chat with Sara Sherlock Bastin of Somerset, UK.

If you’re a mailler and Sara’s name isn’t familiar, you almost certainly will recognize her work. Known online as Corvus or Redcrow, Sara has been making chainmaille since 1988. She’s made 350+ weaves, of which 60+ are her own invention. She has thousands of images in her Redcrow flicker albums, so after you’ve read this post, head over there to check out all the amazing designs!

And now, let’s get to know Sara! 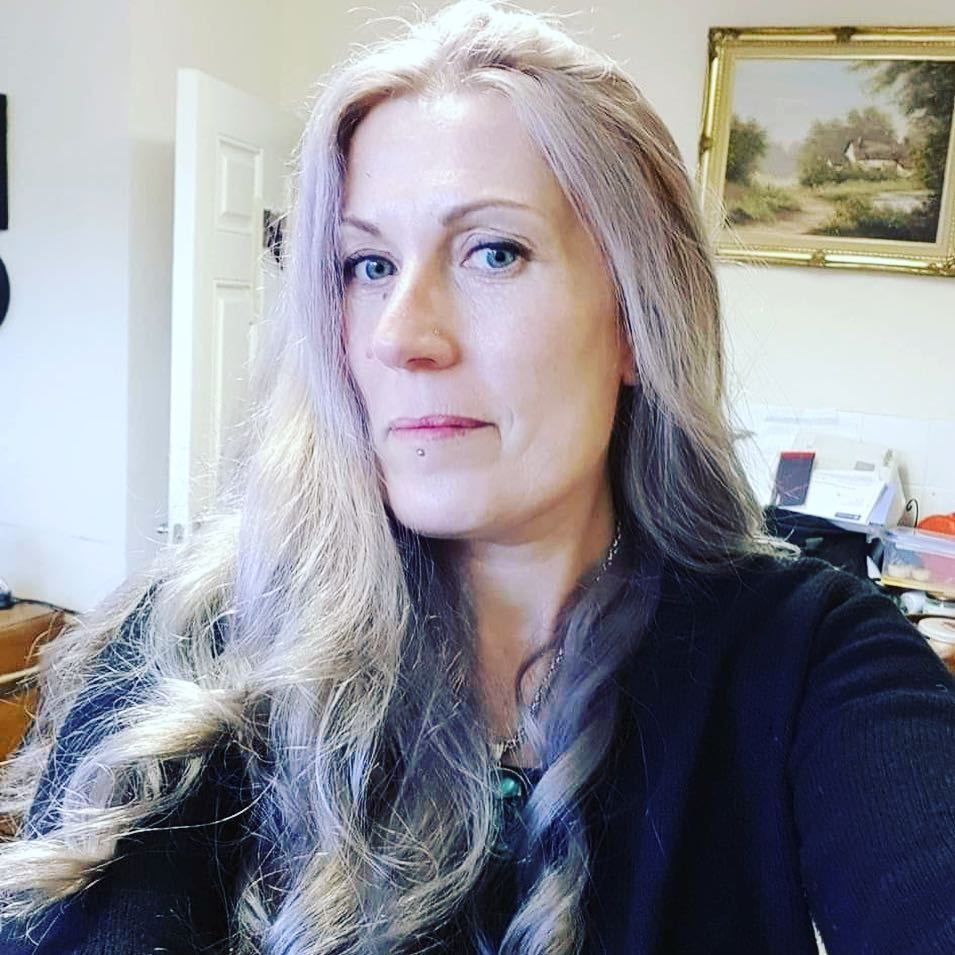 You’ve been doing this a long time! Exactly how and when did you get started with this craft?

I was talked into joining a re-enactment society just after my 18th birthday. It was an 8th century re-enactment group so mainly consisted of Celts, Vikings and Saxons. Somehow I became a Viking and felt pretty naked compared to the guys in maille, so I talked one of them into teaching me basic Euro 4in1. He did and there was no stopping me, my first project was a shirt with sleeves for battle. In 8 days, I had a vest and several blisters. This was galvanised steel 2mm fencing wire wound on an old metal rod I found in my mum’s garden.

I soon realised I could make this stuff on a smaller and more wearable for everyday scale. 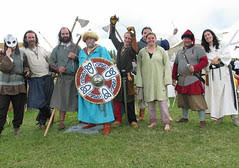 How did you turn your chainmaille into a business?

Not sure how it became a business but might have had something to do with more and more commissions and my ex husband’s accountant mentioning issues with tax. So thought I’d better make it all official.

How would you describe your style and what made you different from other artists?

What is a style? I’m not sure. I always liked figuring things out for myself, so I supposed my style was trial and error. I still think it’s the best way to work as so many new weaves and variations on weaves are discovered this way.

As far as I know I was the only person in the UK making maille for something other than armour, at that time. That made me different from other artists.

I did shows, usually one or two a month and to everyone doing shows who feel disheartened, just keep going. Shows vary so much. I had for years a place in a local art gallery selling my things but again this can be disheartening as they add on so much commission.

Commission orders were what I did most. Nearly all my big sales were custom made things.

How has the industry as a whole changed since you started making maille?

The biggest change to me is the lack of sharing in the maille community. Ten years ago everyone shared their weaves, variations and tutorials freely, well most did. And we understood those things that weren’t shared were fair enough. I think now a lot of newbies are buying tuts they don’t really need to, either because their skill is enough or there’s another tut free somewhere.

Also there’s so much more supplies available now. You guys in the US didn’t really have this problem so much but in the UK the only suppliers were armourers.

You’ve come up with many, many weaves. Can you talk a bit about your creation/design process?

As I said above most weaves were created by accident, usually while trying to make something else. Other times it’s a case of ‘I wonder what will happen if I do this?’

Ah, yes!!! That is my approach as well! It’s fun, isn’t it? What are some your favorite designs that you’ve come up with?

I love Aura most as it’s named after my daughter. And Persephone is pretty.  Honey Bee I love too. 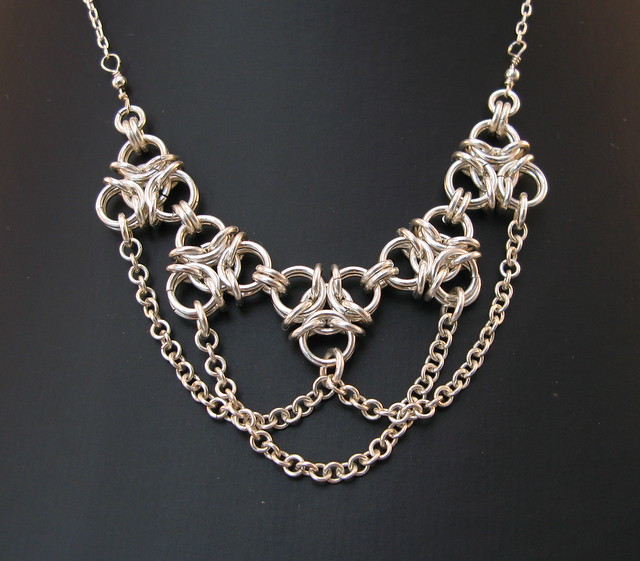 I’m proud of JeanHP3Sheet5IR: it has a tech name, It’s a structural weave and something I never thought I would be able to make, let alone invent a new one. 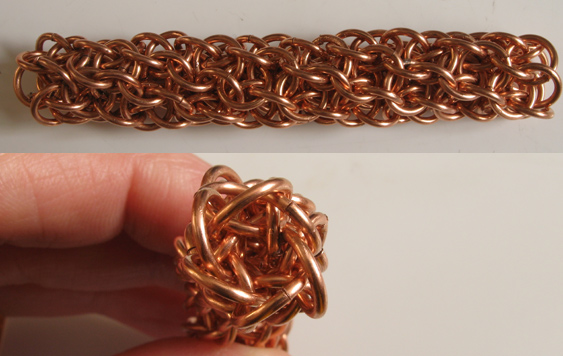 On the flip side, is there a design that you just couldn’t get to work the way you envisioned?

There have been many I struggled with, especially Half Persian 3-in-1 joined. I struggled with this for several days, I eventually did it, but not before suffering a severe headache which actually is now thought to be the start of my health issues. I did join the weave eventually and then I wrote a tut on how to join Half-Persian 3-in-1 on M.A.I.L. The health issues were eventually diagnosed as MS, which is why I am now retired.

I’m sorry to hear that – chronic illnesses can be so very frustrating and challenging. I’m glad that even though you’re retired, you’re still a part of the community!

You’ve created so many weaves. Which are the ones you think most people don’t realize YOU were the original designer?

There are a lot of people who think Aura is someone else’s. As for the other weaves I doubt anyone knows they are mine. Nearly everyone on M.A.I.L. thought I was a dude for years 😁

*whistles innocently* I’m sure I was one of those people. (Though, to be fair, back in the day, I think the vast majority of the people on M.A.I.L. were dudes, heh…)

Do you have any go-to jewelry pieces that you’re nearly always wearing? If so, what are they?

Your profile indicates you’re a retired maille professional.  So, tell me, are you ACTUALLY retired from maille, or do you still pick up your pliers and create pieces to sell? And what was it like deciding to retire from a creative business?

I do still make maille, just not everyday and not for hours at a time, my hands just can’t take it. It was horrible to give my business. It wasn’t just my living, it was my passion too but I’ve learned that chornic illnesses make you accept things you thought maybe you couldn’t. Plus I had so much going on in my personal life, I just couldn’t cope with any more.

I don’t sell unless it’s an exceptional circumstance but I still maille for myself and for presents.

I’m proud to have taught in a jewellery university in Cornwall.

Best part was providing for myself and my children. Most challenging part was probably trying to keep it going in the slow times. And what to do about design stealers, don’t be one of those.

If you could go back and tell yourself one thing before starting your business, what would it be?

Don’t rely on anyone else for anything.

To stay alive, lol! Seriously though, I just want to be here and do the things that make me happy as long as possible.

What is one tool that you cannot live without?

Pliers that were modified by ZiLi.

I’m so used to your online names Corvus and Redcrow, and I’m wondering if there’s any significance to them?

Corvus and Redcrow originally came from.just liking crows but in 2011-2012 a crow was part of my family. Jack lived with us for 18 months and then went back to the wild. He fledged too soon and couldn’t fly, so needed teaching. I had the business name Corvus before him but felt like destiny. 😄

And now for the quick questions that I ask all participating artists:

Do you listen to music/podcasts/tv/etc while mailling? If so, what are your favorites?

What are your favorite artists (chainmaille or otherwise)?

Too many, really too many to mention cause I’ll forget someone and then I’ll feel bad. There’s you, ZiLi, Lloyd, Spiderchain, really this could fill the page.

What do you do when you’re not making chainmaille?

Think about making chainmaille, lol. I love walking when I can and I have dogs, so I’m usually outside and muddy.

What’s the best piece of advice you’ve ever been given?

Care less about what other people think of you and concentrate on liking yourself.

What would your superpower be and why?

Flight. I used to have dreams of flying when I was a kid and that feeling is still with me. I want to fly.

What’s one thing Blue Buddha readers might be surprised to know about you?

Before we let you go, please tell us where we can find your work!
M.A.I.L.: Corvus
Flickr – Redcrow

Thanks so much for taking the time to chat with us, Sara!

Dear Sara,
Just want to say thank you for sharing the photos of your crow. He is just beautiful and so happy he finally was able to fly. Must have been a heartbreak but I’m sure his destiny was with those of his kind. I especially loved the photo of him resting on your dog’s leg! So cute and I love the fact that many creatures can be friends with one another. Too bad we humans can’t learn this from our wonderful creatures on earth.
Just had to tell you how much I enjoyed your photos and if you have time I’d so enjoy photos of your dogs. Aren’t they the best?

Hello Sara,
It was so refreshing to read about your life and struggles with chainmail. I began my chainmail years ago after reading an article about a lady in my local newspaper. I enjoyed it so very much and haven’t been making much due to my rheumatoid arthritis which has done a number on my fingers. Now they’re twisted and so painful. I wish you less discomfort dealing with you disease. I so admire you and your work and wish you the best. I love you have dogs for they are the best for understanding and giving unconditional love. I have an Australian Shepherd named Shelby and treasure her every heartbeat. She is a wonderful companion and friend. Please take care of your amazing self!
Sending my admiration & best wishes,
Helen Culwell
USA
Phoenix , AZ